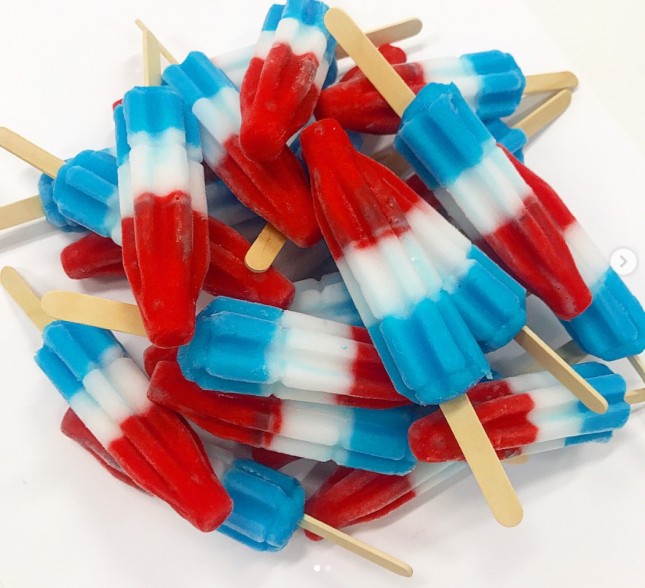 Did you know that the last Thursday in June is reserved as National Bomb Pop Day?   It’s true.   And there’s no more patriotic summer treat than the red, white and blue frozen popsicle – with flavors of sour cherry, lime and blue raspberry (does a blue raspberry even exist in nature?)  – in its distinctive six-finned, blunt-ended bomb-shaped mold.     For kids there’s nothing more American than staining your mouth blue, if you can get to the third and final color without passing out from brain freeze. 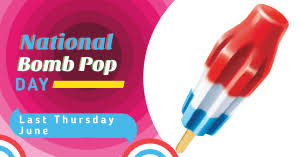 While I appreciated the super strong flavors and cooling effect of the Bomb Pop, as a kid, I was more of a Scooter Crunch guy when the Mister Softee Ice Cream truck pulled up on my street, interrupting our games of kick-the-can.

The popsicle itself was invented in 1905, by an 11-year-old Frank Epperson  after accidentally leaving a mixture of powdered soda flavoring he had been toying around with out on his porch overnight. He awoke in the morning to find the mixture frozen overnight, with its mixing stick poking straight up from the center, calling it the “Epp-sicle.”   In 1923, a much older Emerson sold a more developed version of his signature treats on California’s Neptune Beach.  A year later  Emmerson’s Ice Pop was rebranded a popsicle.

As one would expect, Bomb Pops were invented on July 30, 1955, in the heat of the summer, by James S. Merritt and D.S. Abernethy in Kansas City, Missouri.   D. S. Abernethy is also responsible for the creation of another novelty bar, the Ninja Turtles bar.    When Merritt Foods shutdown in 1991, the Bomb Pop rights were sold to Wells Dairy in La Mars, Iowa, which is known as the city that churns out more ice cream than any other city in the world.    Wells makes the well known Blue Bunny brand of ice cream and is still owned by the Wells family.

Since it’s invention during the Cold War era, an arms race has been waged on our own soil with two other me-too contenders, the Rocket Pop and the Firecracker (owned by the Popsicle Company).     And millions of kids have since melted away the bomb, enjoying the tart, sour and sweet flavors. 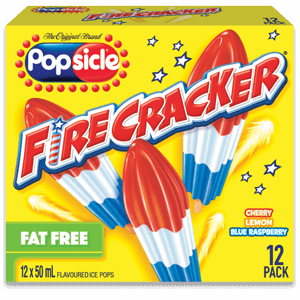 Wells has since grown the singular Bomb Pop into an entire line of tri-flavored treats.  A nearly equally famous fudge and banana version was then joined by a red and green watermelon variety.  Licensing deals with Jolly Rancher, Hawaiian Punch and Warheads candy resulted in other varieties.  Disney even sold a Buzz Lightyear version in its theme parks beginning in 2003. Merritt, and eventually Wells, had created a seemingly unstoppable armory of novelty bomb shaped desserts. 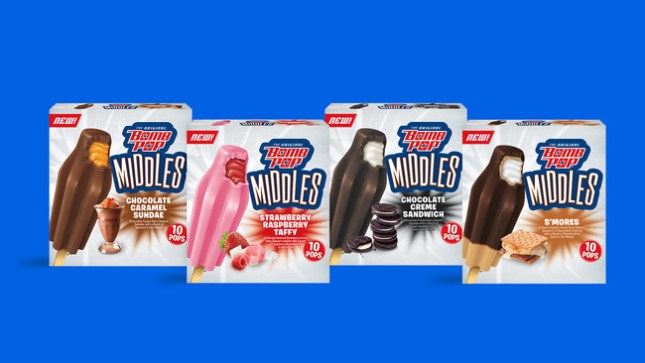 In May of this year, Well’s launched an extension to the Bomb Pop line called Middles – Bomb Pop shaped confections with a hard coating with a creamy ice cream center.   The four new flavors are Chocolate Caramel Sunday, Strawberry Raspberry Taffy, Chocolate Cream Sandwich, and S’mores, which I might have to try this summer! 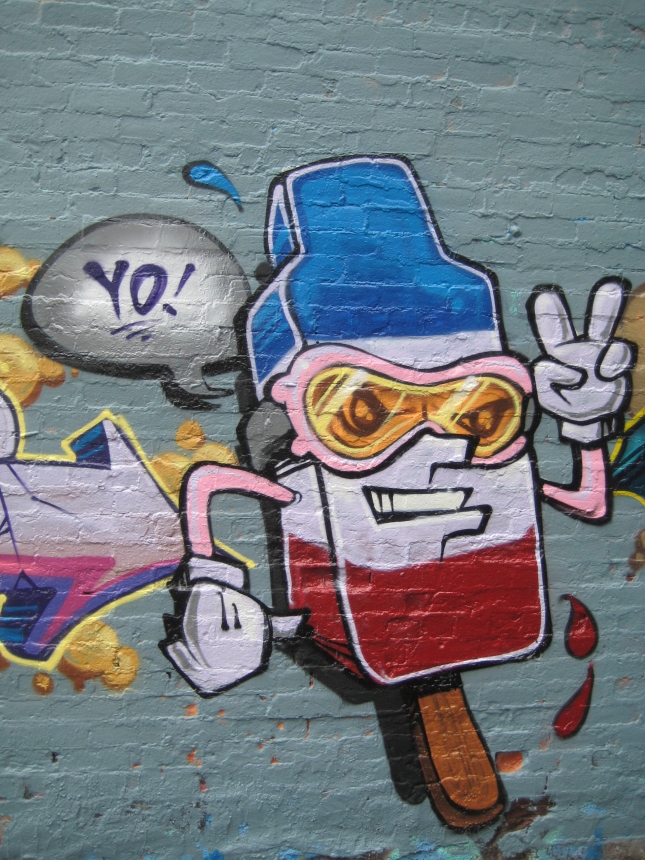 Bomb Pop mural formerly on the wall in the Northside Public Parking lot.