It’s always interesting when a product based out of frugality becomes a popular gourmet food.   This is true with Nutella, the chocolate hazelnut spread that has been taking over America over the last few years, with a renewed surge in popularity.   It’s been eaten as a breakfast spread in Europe since World War II, on croissants and toast, but only recently hit the U.S.     To Europeans, Nutella is what peanut butter is to Americans.

Hailed as one of the greatest inventions of the last century, Nutella conquered Italy, and now the world by storm.   Upscale Chicago Italian Grocer Eataly has a Nutella bar, where you can order Nutella on bread, Nutella on a croissant, and Nutella on crepes.  People pay high dollar for a Nutella filled crepe or croissant.

They are driving the hazelnut demand even higher, raising prices for this wanted nut.

The recipe is pretty simple for Nutella : sugar, cocoa, palm oil and hazelnuts.    Three of the four ingredients are readily available

But now Nutella, with its explosive popularity drives the worldwide demand for hazelnuts.    It uses about a quarter of the world’s total hazelnut production, about 100,000 tons per year. The majority of the world’s hazelnuts are produced in Turkey by families who have been doing it the same way for centuries, picking by hand.   Hazelnut trees grow on the steep slopes that rise from the Black Sea Coast.

A late frost in Turkey that froze the hazelnut blossoms cut the supply in about half, and caused a spike in pricing about 60% above normal over the last year.

Because hazelnuts are now so valuable, more people want to grow them. Farmers are growing them in Chile and Australia. America’s producers in Oregon are expanding.   And a new small research farm on Rutgers University in New Jersey is trying to get into the game with genetically modified hazelnuts.   The typical European hazelnut is susceptible to a fungal blight in the Eastern U.S., so Rutgers is grafting hardy hazelnut varieties with others to create those that are blight tolerant.   Ferraro has told Rutgers they will buy as many hazelnuts as they can produce.

The warning to those that want to start growing their own hazelnuts in their backyard is: get a guard dog. Squirrels go crazy for hazelnuts and will do anything to get them before you do! 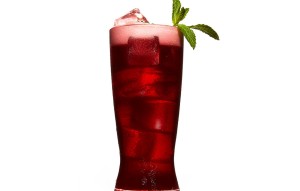 One of my August posts discussed the shandification of America.    And now that we’re all shandified, and men can mix diluting liquids with their otherwise hearty lagers and pale ales without shame, here are a few more suggestions.   In hopes of an Indian Summer before the brutal winter the local forecasters are predicting, I am posting four refreshing summer cocktails that like the shandy, use beer as the main ingredient. They are listed in order of my own preference.   Enjoy and hope for a less brutal winter than prediction!

The first is a ‘raspberry snakebite’. This drink is a twist on the popular ‘Snakebite and Black’ cocktail from the UK, which mixes equal parts crisp, dry hard cider with equal parts lager and a dash of black current liquor.  The English have an addiction to their unique black current flavor. It can be found in their cough drops, teas, and candies. The ‘Snakebite and Black’ is also known as a ‘diesel’ in England, and with the addition of vodka, it’s known as a ‘turbo diesel’. Our drink, however, goes more American and uses raspberry lambic beer, such as Lindeman’s Framboise instead of hard cider and mixes with 1 oz. of crème de cassis (which is made of black current) , garnished with a mint sprig.      The same could be done with a strawberry lambic for another interesting, but refreshing twist.   I would think that a peach lambic and black current would not compliment each other.

The second is an even spicier twist on my new favorite Latin American beer mix, the Michelada.   This one is called the ‘Sriracha-lada, a hot sauce Michelada with some serious kick.   For this drink, combine 1 ounce of fresh lime juice, 2 teaspoons. of Sriracha hot sauce, and ½ teaspoon of Worchestershire sauce in a salt rimmed pint glass filled with ice.   Top with a Mexican lager like Pacifico or a Guatemalan lager like Gallo and garnish with a lime wheel.     Gallo beer sponsored Pope John Paul II’s visit to the Central American country, if that makes you feel holier while drinking.

The third beer cocktail is called ‘Vitamin C brew’, and guaranteed to fend of scurvy from those long summer yachting trips.   It tastes like a boozy Orangina soda from Italy and you can really drink them all day.   It combines 2 ounces of fresh orange juice in a pint glass filled with ice , 1 ounce of gin like Bombay Saphire, and an American style lager, garnished with an orange wheel.

The fourth and last Indian summer beer cocktail is called the ‘Aperol Mist’ or the ‘St. Anthony’. It’s a take on the ‘Aperol Spritz’, which is a mixture of Aperol and Italian proseco.   This is a more flavorful, stronger version of that drink.   It combines 1 ounce of Aperol with 1 ounce of lemon juice in a pint glass of ice, topped off with a Hefeweizen-style Belgian beer such as Hoegaarden, and garnished with a lemon twist. Aperol is an Italian apertif made in Padua, since 1918, but only popular after World War II. It tastes like Campari, but is about half the alcohol. Its main ingredients are bitter orange, gentian (a root from an alpine flowering plant also used in bitters), rhubarb, and cinchona (bark from which quinine is extracted, has been used by the Jesuits in missions for malaria fighting and muscle relaxation).

However you enjoy your hot weather drinks – with a good book in a hammock, by the pool on a chaise lounge, on the sand underneath a big umbrella, or on the boat with the wind blowing through your hair, these four are guaranteed to bring a smile to your face and fun to you day. 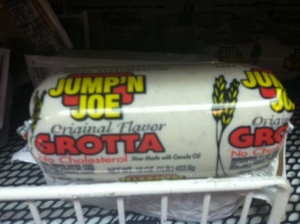 I’ve spoken about the north German roots of goetta, descending from peasant grain sausages like Knipp, panhass, and pinkelwurst.   But I’ve not yet discussed the one product that has actually evolved locally from goetta.   This is a product called ‘grotta’, that as far as I can tell is made from one company in Batavia, Ohio, called Jump N Joe, which is the brand under which it’s sold.

Basically grotta is vegan goetta – its goetta without the meat.     It’s sold in an encased roll like Glier’s goetta.   And, it still has the same steel cut oats consistency, onions, and spices, but without the animal fat.     The only difference is that grotta contains cornmeal in addition to the pinhead oats, which is not in goetta, and thus gives it a different mealy texture than most goetta afficianados would expect.    It also kind of makes it more like a savory polenta.    I do remember my dad bringing it home as a test for us kids one Sunday, saying it was something similar to goetta, but without the meat.   Even as kids, my brother and sister and I thought, ”Goetta without the meat, that’s gross, it’s just like frying cream of wheat!”   And it was just like fried porridge for us.     That one Sunday was the last time grotta was brought into our household, it was never spoken of again, and the world became normal once more.

The company, Jump N Joe, originally started in 1952 with its own goetta product, but changed in 1965 to offer only its meatless grotta formula.  It has long promoted the benefits of its less fatty, goetta-like product, and gives nutritional information on its website.   For the growing number of vegans who grew up on goetta, grotta offers the ability to connect with the past, without breaking their food mantras.

I ran into it on the meat shelves at Jungle Jim’s in Fairfield, but it’s also available at many Kroger and Remke supermarkets in the Greater Cincinnati.   Unfortunately, it’s less widely known in the area, there are no Grottafests or a large amount of consumer marketing.   It is also available and served at the hipster vegan store in Over-the-Rhine, called Park + Vine.

While I do respect the fact that someone has made a business out of a healthier or vegan form of our ancestral comfort food, I much prefer Shoshana Haffner’s vegetarian goetta at the old Honey’s Restaurant in Northside.   It tasted more like goetta than grotta, and also didn’t contain cornmeal, so the texture was more goetta-like too.   Sadly, Honey’s is no longer and Shoshana’s vegetarian goetta is just a memory.