December 4th is the Feast Day of St. Barbara, who is the patron saint of miners, artillery men, and anyone using explosives in their job. Barbara was a martyr, said to have lived in Lebanon in the 3rd century. She confessed to her father, a rich pagan, that she had become a Chrisitian, and he had her tortured and beheaded.    The legend goes that her father was immediately struck by lightning and killed.    I know, I know, it’s all a very violent story for the Christmas season.

In Germany, this day is called Barbaratag, and a custom of putting a cherry branch or kirshzweig in water is practiced in Bavaria. If it blooms by December 25, then this means good luck for the year. In the Bavarian region of Germany, where this is a custom, they also have a Christmas decoration, which is a candle holder in the form of a traditional miner in his uniform, with plumed hat. The typical greeting of a miner in Germany is “Gluck Auf!” or good luck, which is sometimes inscribed on these candles.   Many of these candles can be found on Catholic altars in Bavaria. 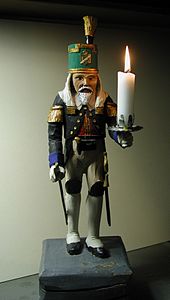 In Tyrol, Southern Austria, Catholics make kletzenbrot, a sort of fruitcake made predominantly of dried pears, but with the additions of raisins, dates, and other dried fruits, along with hazelnuts and rum or brandy.     It also wouldn’t hurt to have a black forest cake, which includes cherries and sometimes kirsch or cherry liqueur.

However, it’s the Eastern Orthodox countries of the Mediterranean who have the food of this holiday. In Georgia, Saint Barbara’s Day is celebrated with a traditional festive food called lobiani, a bread baked with a bean stuffing.

In Greece, the day is celebrated by the Artillery Corps of the Greek Army and the Cypriot National Guard at their camps, where the traditional Greek pastry, loukoumades – the honey drenched deep fried dough puff – is passed out, because they resemble cannonballs. 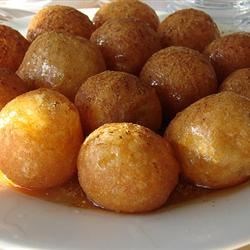 St. Barbara is also the patron saint of the town of Drama, in Northern Greece, where a sweet called varvara, which is a pudding of boiled cracked wheat, berries, nuts and cream, is served to celebrate the day.

The Varvara dish of Drama, Greece.

In Arab Christian communities in Lebanon, Syria, Jordan, Palestine, and Israel, the day is called Eid-il-Barbar and is celebrated with a dish called Burbura, a healthy bowl of boiled barley, pomegranate seeds, raisings, anise, sugar, and walnuts or almonds.

Another interesting story surrounding St. Barbara’s Day is that the name barbiturate – the family of pharmaceutical drugs – is said to be derived from the suggestion of an artilleryman commemorating the feast of St. Barbara in Germany in 1864, where chemist Adolph von Bayer encountered at a local tavern, celebrating his recent discovery that day.

Two versions of the Cincinnati Crème Horn – one with caramelized sugar and one with confectioner’s sugar, both super-delicious.

There’s a Christmas cookie brought by Eastern European immigrants to Ohio that has three names based on where you settled. It’s a rolled cookie shaped like a horn, cream filled, and it is part of a large family tree of horn shaped, spit-cooked confections. You might call them the Germanic/East European version of the Italian cannoli. They’re called crème horns, ladylocks, or clothespins, depending on where in Ohio they’re made. Sometimes they’re also called ladyfingers, or coronets.

An assortment of European spit-cakes that are ancestors of the Crème Horn, popular at outdoor winter fests.

A European spit cake being cooked.

The Cincinnati version is the crème horn and is crunchier and lighter and crimped at one end so the cream doesn’t shoot out on first bite as with a cannoli. They can be had at such local bakeries as Little Dutch Bakery in Mt. Healthy, Regina Bakery in Cheviot, or St. Lawrence Bakery in Price Hill, who’s been making them as long as their German immigrant founders have been in business. Our version is based on the German baumstreitzel (tree pastry) or schillerlocken (named after the golden locks of hair of the German Poet Schiller). They are ribbons of pastry dough wrapped around a conical wooden form and spun over an open fire or baked in a wood fired oven. They are then filled with a sweet cream. The baumstreitzel is still very popular in the Christmas markets of Germany, and while cream filled, are also coated on the outside with a variety of nuts, cinnamon-sugar, and chocolate drizzles.

They’re called Ladylocks in Western Pennsylvania around Pittsburgh, and nearby Eastern Ohio, around Steubenville, where they’re a featured item on the Wedding Cookie Table. Here, they’re a puff pastry horn filled with sweet buttercream icing. They conjure memories of grandmothers and great grandmothers who came from Europe, who brought the tradition with them from the old country. Today it can be an all day mother and daughter affair for families around Christmastime. They might be called Ladlylocks because of their origin as a wedding cookie – where a man locks himself into one lady for the rest of his life.

In Youngstown, Ohio, they’re called clothespin cookies because they were originally wrapped around wooden clothespins. Today metal forms similar to cannoli forms are used, but if you do use the wooden clothespins to stay true to form, make sure they’re well greased as the dough will stick to unseasoned wood.

Their near cousins are the Hungarian kiffle, which is basically a thin rolled pancake or crepe filled with a cream cheese, fruit , or nut based filling. Its Jewish cousin is the rugelach, which are typically fruit filled with apricots or even poppyseed. 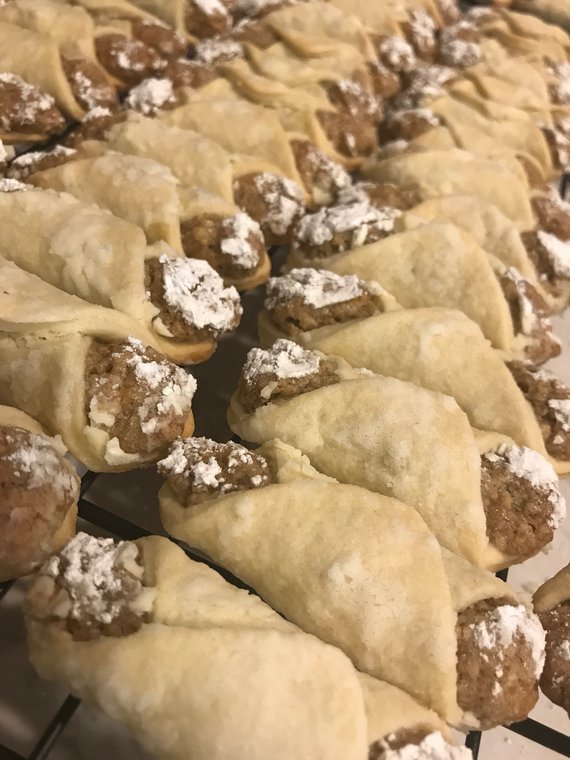 Whether you call them Clothespins, Ladlylocks, or Crème Horns, they’re bound to show up on an Ohio holiday cookie table.