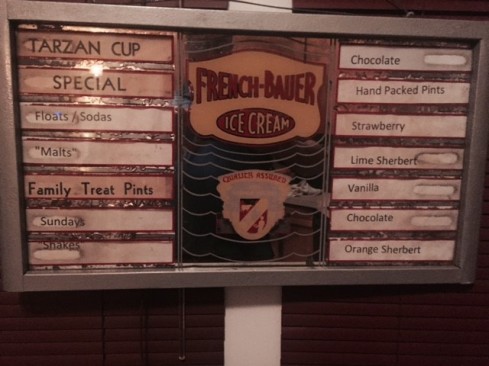 Over the weekend, I found a 1930s soda fountain menu sign from a long forgotten local company, the French-Bauer Ice Cream Company.     It was such a rare and amazing bit of local food history.   The menu reveals the flavors they made – Chocolate, Strawberry, Vanilla and Lime and Orange Sherbert.     By the way, we predominantly pronounce it ‘sherbert’ in Cincinnati, not the supposedly more correct ‘sherbet’.   According to my father, the French-Bauer Vanilla flavor was a deep, rich,  custardy French Vanilla with a yellow color.  He experienced their ice cream at two local pharmacy soda fountains in his native North College Hill.

The sign also revealed an interesting promotional piece called Tarzan cups that were supplied from 1934-1936.   Think of these as early movie co-promotions.    Kids could save 12 lids from these Tarzan ice cream cups and send them in for one of 12 Big Little Book stories like Tarzan, Dick Tracy, and the Texas Rangers.

Cincinnati is an Ice Cream Town, ruled by the Big Three – Graeters (1870), Aglamesis (1908), UDF (1938).   But long before they were around, the French Dairy Company had already pioneered wholesale collection and retail delivery of milk.     Before that milk had been sold in buckets, being bought directly from the dairymen.     New York City was the first city to institute retail delivery, but Cincy was second with the French Dairy.   Founded in 1842 by Thomas Joseph French, an immigrant from Sussex, England, the company lasted 137 years until it was sold to the Meyer Dairy in 1979. That’s the longest run for a dairy in Cincinnati.

French Dairy founder, Thomas Joseph French, in an 1850s  portrait by John Bradley. Note the cow being milked in the background

Oakley was the home of the first French Dairy. When the dairy was moved further out of town to Lebanon, Ohio, the Oakley land was sold and became the Oakley Racetrack in the 1890s. Names to be found in the Oakley French Dairy cowherd were Betty Mink, Louisa Bouwke, and Dutch names like Klazientje. The dairy kept the best milk cows and sold the young bulls like Oakley Chief and Duke of Pendleton at auction, as well as breeding for other wealthy Cincinnati Gentlemen farmers.

Two French Brothers lived on Observatory Avenue in Hyde Park in the 1890s. This put them as near neighbors with the Longworth, Anderson, and Stettinius families of Grandin Road, who raised Jerseys and Friesian-Holsteins on their huge manor-esque estates.  One of Stettinius award winning Jersey milk cows, known for her cream production, “Nora of Oatfield’ was sold to the French Bauer Dairy in the 1890s.   The French brothers and John Longworth Stettinus at that time had a relationship in the breeding of their herds, sharing a prize bull sire named International Prince.   Talk about hyper-local sourcing and vertical integration – that’s real udder-to-cone ice cream making!

Thomas French, the founder died in 1899, and the business was taken on by his sons – Tilden Russell, Thomas Jr., Algernon S.F., Albert and William Arthur. They were phasing out horse delivery in the 1930s with new automobile delivery.   At that time it was rare that a delivery truck would sell all its milk.   So, not wasting, the returned milk was tested, and the fat removed for butter production.

A series of mergers and acquisitions created what would become the second largest dairy in Cincinnati by the 1930s.     They used their size to nearly monopolize soda fountains in the area.   First was the Townsend Dairy Company in 1906.

In 1910 the French Brothers merged with Bauer Ice Cream and Baking Company, founded by Julius H. Bauer.   At that time the combined operations could produce 150 tons of ice and 110,000 gallons of ice cream a day.   They had 300 horses and 200 wagons in their fleet, a dairy in Lebanon, Ohio, 3 new plants that made condensed milk, and 15 restaurants and retail stores to serve ice cream and dairy products.

In 1915 they bought the diary business of Charles I West.  Finally, in 1966 they made their last acquisition, buying the Cupid Ice Cream Company. Cupid was founded in 1921 by Charles Ponticos, an immigrant from Kapsi, Lamia, Greece. Cupid specialized in ice cream novelties, like the Good Humor Company, to distribute to truck and pushcart vendors.

In 1938, UDF came along and offered dairy products on a “Cash and carry” basis in his store in Norwood. With no delivery costs, he could offer his products at a discount.   No surprise they’re the only locally owned dairy still around.     The years after saw huge consolidation of local dairies, and the old small neighborhood dairies dropped off the map.

In 1979, French-Bauer sold out to the Meyer Dairy, and ice cream brand that many knew from soda fountains before, through and after Prohibition, went into the annuls of ice cream history.

One thought on “Before the Big Three, French-Bauer Ruled Ice Cream in Cincinnati”