Arnold’s Greek Spaghetti has been on the menu since 1959.

This month the owner of Arnold’s, Ronda Breeden,  passes the torch of ownership to her son Chris Breeden.  He will become the 8th owner of the restaurant (9th of the property if you count the madame who first owned it and operated it as a whorehouse, Susan Fawcett).

There’s a dish called Greek Spaghetti that has been on the menu since 1959, whose invention is credited to then owner Jim Christakos, but probably invented by his wife, Athena Jones Christakos.    There’s always the woman behind the man who rarely gets the credit!    Duck tailed and poodle skirted teenagers were dancing to the two top hits, Venus by Frankie Avalon, and Mack the Knife, by Bobby Darin.   My own father graduated from high school that year.

Now in Cincinnati, when we think of Greek Spaghetti, our minds go to the three-way, or Cincinnati Chili.  But this dish is not that – its a mix of a buttery garlic sauce with sautéed onions, green peppers, cremini mushrooms, green and black olives, and yummy bacon.      The reason for it’s 60 years on the menu is that it’s one of the most popular items. 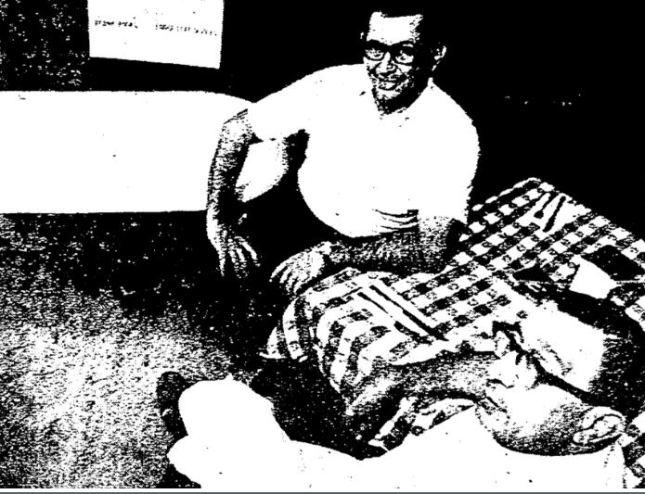 Alex Chaldekas in the back and Jim Christakos in the foreground.

But it very well could have been a Cincinnati chili and here’s why.    Jim and his brother George Christakos bought Arnold’s from the third generation of the Arnold’s family.   Both Jim and George had been wrestlers for the Central Parkway YMCA.   Jim was crowned the light-heavyweight champion in 1934 and received the nickname “The Greek God.”  He went on to become a professional wrestler, grappling with the likes of another famous greek wrestler, Jim Londos, who was sort of the Hulk Hogan of his day.   Jim is also rumored to have made pickups for the mob in Newport, Kentucky.

Will Chaldekas behind the counter of ABC Chili Parlor in Covington, Kentucky on Scott Street in the 1950s.

Jim sold the restaurant to his brother-in-law’s brother, Alex Chaldekas when he thought he was dying of throat cancer, which he survived.   Alex Chaldekas has operated the ABC Chili Parlor in the 1950s with his brother Will Chaldekas.   Will Chaldekas’ wife, Bess Jones was a sister to Jim Christakos’ wife Athena Jones.   Their brother Albert Jones owned the downtown Skyline Chili.      Albert’s wife Carolyn Georgeton was the sister to the Georgeton Brothers who started the venerable Ludlow Avenue Skyline Chili in Clifton.     Nicholas Lambrinides, founder in 1949 of Skyline Chili, said Alex Chaldekas was his first customer at the original Price Hill Location.    Chaldekas’ dollar bill hung on the wall of the original Skyline until it was demolished in 2001.

The Cincinnati Chili parlor family is a small and very interlaced one, as you can see!   They all belonged to the St. Nick-Holy Trinity Greek Orthodox Church that hosts the annual delicious Panegyri Food Festival every summer, where all the chili parlor purveyors discussed the business.    So, for very good reason, Arnold’s could have become a Cincinnati Chili Parlor, but it never did.   And to my knowledge, Arnold’s never served Cincinnati Chili or cheese coneys.

So, the Cincinnati Greek stamp still lives on at Arnold’s, maybe for another 60 years, thanks to Athena and Jim Christakos.

3 thoughts on “Arnold’s Greek Spaghetti Isn’t Chili Parlor Spaghetti, but It Could’ve Been”