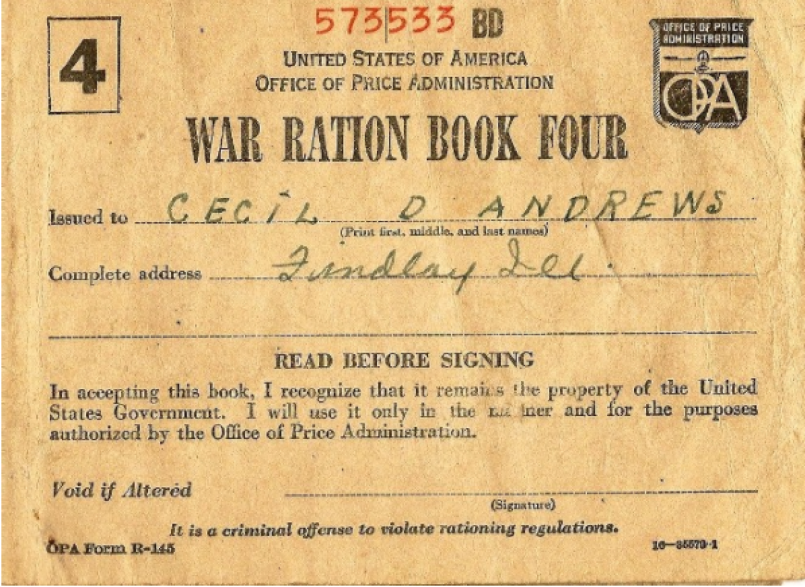 Nowadays, wars are mostly technology wars and here at home we don’t feel the affect like our ancestors did during World War II.    Back then Americans were put on food rations – everything from butter, sugar, meat, milk.   Everyone did their part to contribute.    Many planted Victory Gardens to make up for rationed items.   And here in Cincinnati, like everywhere else, meals were stretched.   Goetta, our oats-stretched grain sausage played a role in many families.

But we don’t realize how the shortage changed the way Americans ate when the war was over.   There are several products that emerged as a result of our shortages that continued after the war.

One of the most interesting story is the Hostess Twinkie, released in the 1930s.   It was originally a banana cream filling and the treat was much more like a banana cream cake.    Banana shortages during the war forced Hostess to change the filling to the bright white vanilla cream filling, which is what we know the Twinkie as today.

Shortage of cream necessitated something called Half and Half, a product that was introduced through our local White Castles.   At the time of the war Americans liked a lot of cream with their coffee.   The Cincinnati White Castle cream plant devised a mixture of two quarts of cream with one quart of whole milk, stretching the cream a third.    Other makers added more milk stretching it even farther.    This would become the standard creamer for millions of coffee drinking Americans.

Coffee itself was in short supply as Americans bought it off the shelves in hoards ahead of rationing.  So, Americans turned to a variety of Victory Coffees, without coffee, like NesCafe, which was also popular with the troops, so was also difficult to obtain. Another product Postum, a cereal product flavored with molasses was served by many restaurants instead of coffee.   There was also a variety of soy derivative coffee like drinks served at cafes and sandwich shops – Soykee, Soyfee, and Kofy Sub.     This and  meat shortages introduced Americans to soy protein, which became more prevalent in American cuisine after World War II, fostering our own local soy company, founded by a Japanese American who had been interred in a Japanese immigrant camp during the war.

For the few hamburger chains like White Castle that were in existence prior to the war, meat shortages posed serious issues.   White Castle invented the mini egg sandwich, the grandfather to McDonald’s Egg McMuffin.   It was fried on the griddle in a small metal ring and served on the small bun.      They also served spaghetti (something Chili Parlor Cincinnatians were familiar with since the 1920s) as a meat substitute, in a tomatoey marinara sauce.

The French fry became popular as a filler side item at sandwich shops and burger joints because potatoes were not rationed and were prevalent in America.   Customers became familiar with eating French fries along with their burgers or egg sandwiches and demand increased after World War II.   McDonald’s did not invent the French fry!

Peanut Butter was a good source of protein that was never rationed during the War.   Peanut butter had been around since the 1920s, but was not the homogenized creamy kind we know today.   The pulp easily separated from the oil and had to be mixed.   Soldiers nicknamed it monkey butter and it was popular part of their rations.   And, to sweeten in up and avoid it sticking to the roof of their mouths, service men added jam, also a part of their rations to make the P B & J sandwich.    Soldiers brought this back with them after the war, kids loved it and the P B & J sandwich took off as an American iconic lunch sandwich.

There’s some evidence that our local party food Hanky Panky, has its origins in the trenches as well.  S.O.S  was a military term used particularly heavily during World War II to refer to a meal made of creamed chipped beef on toast, flavored with Worchestershire and dried parsley.  It seems Hanky Panks may have been an adaptation of this military convenience meal. The amp up to the American civilian table post war was its replacement of chipped beef with fresh ground beef and spicy sausage and Velveeta cheese.

Sugar rations affected the candy and confectionery industry long after the war, forcing many commercial candy companies to produce outside of the U.S., where sugar was significantly cheaper.    It was one of the factors that led to the closing of many small regional candy companies.

Many other shortages created new food stretching items from ingenious housewives.    And we are lucky that our wars today don’t cause us the same sacrifices that our ancestors went through to fight the good fights.