Nashville Hot in Crescent Springs, Kentucky.
It used to be that the burger was America’s sandwich .   Everything American was compared to apple pie, hot dogs and burgers.   Well now that FCS or fried chicken sandwich has surpassed the burger in popularity, it’s a brave new world.    It’s a similar trajectory as salsa overtaking ketchup as the most popular America condiment.  In search for the better burger, we’ve found the fried chicken sandwich.
All the chains are clamoring to invent an FCS that rivals the king, Chick-fil-A, who’ve grown a staggering 18% in the last year, compared to the typical 2% or less of the fast food industry overall.   Even better burger startups like Mooyah have added an FCS to their lineup and claim staggering sales increases.    There seems to be an addiction to Chick-fil-A’s FCS.  My nephews love it, and they’d go there over McDonald’s any day.
Ever since Truett Cathy created the fried chicken sandwich in the 1960s, it has been vying for most American sandwich and its finally won.    McDonald’s introduced their McChicken sandwich in 1980 and it flopped, but they brought it back 8 years later and its been around since.      Lately they’ve introduced a Southern Style Buttermilk Crispy Chicken Sandwich to rave reviews.     FCS chain Leghorn in Chicago opened in 2014, promising to donate 2% of earnings to social causes that Chick-fil-A would never touch, with their conservative Southern Baptist influence.    We’ll see if conscious dining prevails over first-to-market.
The South may have lost the war between the states, but it’s winning the foodie war.   And another variation on fried chicken, is being used to differentiate FCS’s all over the U.S.   It’s the hottest new trend this year -Nashville-style  hot chicken, and it’s beginning to travel north of the Mason–Dixon line.     It’s a variation that has stayed segregated until only a few years ago in Nashville’s African American community. 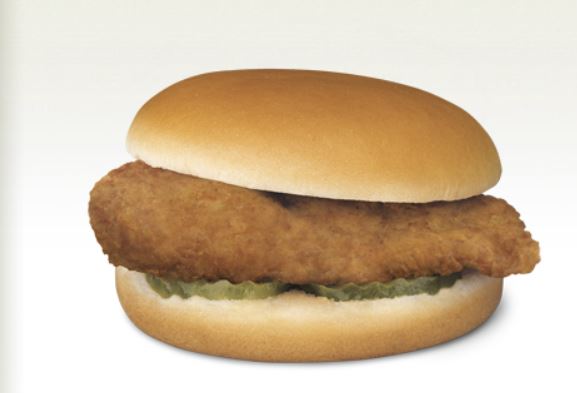 The first FCS from Chick-fil-A
We first have to go back in time to 1946 to understand the FCS.  That was when Truett Cathy, founder of Chick-fil-A invented his fried boneless breast of chicken and put it on a sesame seed hamburger bun.    At that time he was running a restaurant called the Dwarf Grill in Hapeville, Georgia, across from the now demolished Ford Motor Plant, whose workers patronized his restaurant.   The first secret of its deliciousness is that the breast is marinated in pickle juice.     Being a vinegary solution, pickle brining tenderizes the chicken, gives it some spice, and makes it juicy.   The second secret is that it is pressure fried, which also adds to its juiciness.   It originally had over 20 spices, nearly twice that of the Colonel’s original recipe.      It was Truett Cathy’s mother’s recipe – Lillla Kimbell Cathy, but of course the mogul who grew his restaurant to become America’s largest fast food chain, is given credit for invention of the FCS.   This food etymologist, won’t steer credit away from economizing mothers who are the best and most prolific food inventors.    But Cathy registered the term Chick-fil-A, in 1963. after first calling it the chicken steak sandwich, which didn’t have the same marketing stickiness.
After finding a pressure fryer made by a company in Eaton, Ohio, that cooked chicken in the same time it took to cook a burger – 4 minutes –  Cathy opened his first Chick-fil-A in 1967 in Greenbrier Mall in Georgia.    New technology called the clamshell grill, rolled out over 15 years ago for McDonald’s has reduced that burger cook time in half, and some cases even more.   But still the FCS reigns supreme.
But now the FCS is becoming the NHFCS or Nashville Hot Fried Chicken Sandwich.     And all the big guns are getting involved.    KFC introduced their Nashville hot chicken on the bone and tenders (which can me be made into a sandwich) this January.   O’Charley’s came out with their Nashville Hot FCS and in their commercial, they blast:  “Hot Chicken from Kentucky???  Bless their hearts!”    Tested in Pittsburgh, when it came to Nashville, KFC’s Nashville hot  was scorned by locals.    You see, in Nashville their hot chicken is served with pickles on top, open faced on white bread, not sandwiched and served with a biscuit.
Nashville hot chicken is more than just another spicy Cajun type of chicken.  It’s super hot and the story is supposedly one of even hotter revenge.  The traditional recipe is essentially dry-brined chicken that’s deep-fried and tossed in a sweet-spicy sauce made from cayenne and brown sugar.  Although evidence suggests spicy hot fried chicken has been served in Nashville since as early as the 1930s, the modern Nashvile hot chicken is said to have been born in 1971,   And its inventor was Thornton Prince III, owner of  the BBQ Chicken Shack Café.  Apparently he was a huge womanizer.   After one particularly late night out, his girlfriend decided to take revenge on her cheating boyfriend.  So she served him an extremely spicy-hot  fried chicken, thinking it would give him the burn.   But her scorn backfired and he loved it.   So much, that he took it to his restaurant and others loved it too – soon other spicy fried chicken shacks popped up in the African American neighborhoods in Nashville, like Hell’s Half Acre and others, where it stayed hidden from the rest of Nashville’s population until recently.
Prince’s great niece Andre Prince Jeffries now operates the restaurant her uncle owned, Princes Hot Chicken Shack, which has been popularized on the Food Network show Diners’ Drive Ins and Drives and as even been given an American Classic James Beard Award for its invention.
The Eagle in Over-the-Rhine makes a pressure fried sweet and spicy Nasvhille hot-like FCS that after two years continues to cause two hour waits on the weekend.     They were the first to the Nashville hot chicken game in Greater Cincinnati, but its’ a Yankeefied spiced-down version that doesn’t pack as hot a punch as the original.
Now Crescent Springs Kentucky, seems to be the capital of the local Nasvhille Hot Chicken food craze.   A Chef driven concept called Nashville hot opened in February to rave reviews and big business.  They serve five levels of spiciness from original Nashville Hot, Southern Heat, Midwest Medium, Yankee Mild and Traditional   They even serve a Nashville Hot fried and grilled catfish which is pretty damn good.    Captain D’s has released a Nashville Hot Fish version, that they’re test marketing this year in three southern markets.  Nashville Hot’s owner has eyes on the other side of the Ohio River in either Oakley or Westchester/Mason later this year.
Another chain, Joella’s from Louisville, Kentucky, is opening across from Nashville Hot, but they missed their boat of a mid February open date.
Colonial Cottage in Erlanger, Kentucky,  has been serving bone in Nashville-style  hot chicken for a while and has the required burn of the original. 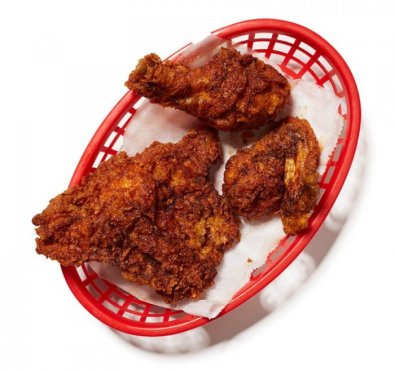