This past Sunday evening on the Great British Baking Show, the competition centered around pies.   It made me think about all the heritage pies and signature pies from restaurants here and gone in and around Cincinnati.     As it turns out we have quite a few heritage and signature pies in our history.

Pie hasn’t been the most popular dessert form for a while. It’s hard to find a good fruit pie around, and it seems we only crave pie around the holidays.   That said, a brand new shop O-Pie-O, which specialized in pies, just opened in Walnut Hills this past week.   They had been selling on a small scale out of a tent at Findley Market downtown.   They seem to be bringing back the popularity of pie.

Pumpkin pie has a cult following in Cincinnati.   And people are particular about whose they buy.    We’re a very brand loyal pie consumcers when it comes to the pumpkin variety.  A few years ago, Busken and Frish’s started a pumpkin pie war inadvertently with billboards, that created national interest and a New York Times feature.     For older pumpkin pie snobs, the best pumpkin pie remains Frisch’s.   Theirs is just the right consistency, color, and spice blend.   Most new pumpkin pies are more sweet and cinnamon, rather than a blend of the three pumpkin pie spices, nutmeg or mace, cloves and cinnamon.   These are three very strong spices, but a pumpkin pie masters the balance of these three flavors so that all are tasteable, but none is too overpowering.       A good second pumpkin pie that does this in addition to Frisch’s is Grand Finale’s pumpkin pie, made in a small crock with the owners’ mother’s nearly 100 year old recipe. 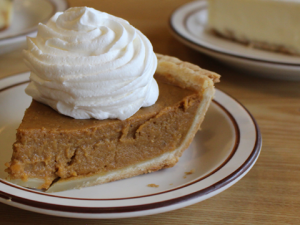 Frisch’s is really one of the few go-to places for good fruit and cream pies.   They have trademarked a brand – Frishly-baked.   They used to do a traditional mince pie, that’s not as popular as it used to be. But they do make good coconut cream, cherry, and apple pie.

Restaurants like Mecklenburg Gardens has their nearly 50 year old recipe for Mecklenburg pie, a pecan mocha pie with a coffee cream whipped topping.   This was the signature dessert when the restaurant earned their 4 Michelin star status.   The crust is chocolate pecan crust, a mocha cream chocolate expresso filling, and a coffee whipped cream. It’s a variation on a pie made famous at Blum’s, a San Francisco sweet shop that closed in the 1960s.

The Trolley Tavern on the West Side had a famous turtle pie that included caramel, chocolate, and roasted pecans.

Habig’s on the West Side had a famous seedless German-recipe Concord Grape pie that some people said was the real reason to go there to eat. 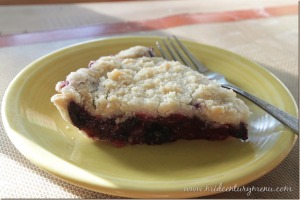 U.S. Chili is one of the few restaurants in the city that still makes custard pie. If you give the owner a few days he can make one to order.

Five star Pigall’s had a Crème Caramel Custard pie that was well loved.

The restaurant at the old Shillito’s Department Store downtown had a frozen lemon pie that many people remember, with a graham cracker crust, and a mix of frozen lemonade and sweetened, condensed milk.

Germano’s in Springdale had a raspberry cream pie that many people loved.

ZZ’s Pizza in Walnut Hills, in addition to making awesome gourmet pizza pies, made a famous rich butterscotch pie and banana cream pie that had a layer of chocolate on the crust.

The Cincinnati public school bake shop, founded in 1960, had a very popular chess pie they made, from butter, sugar, egg yolks, cornmeal, nutmeg, salt, tapica powder and powdered milk, according to Rhonda Warren, who made them for many years. 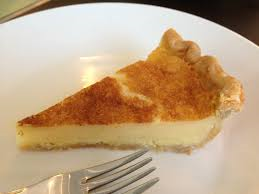 In the 1980s the Grasshopper pie, a cream pie made with crème de menthe and a chocolate crust was popular at several local restaurants.

The Golden Lamb in Lebanon, Ohio, was famous for their French Silk Pie, their Shaker Lemon Pie, and their Black bottom pie, a two layer cream pie with chocolate filling, and a spiced rum filling, underneath a whipped cream topping. 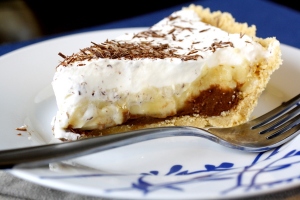 Although I’m a fan of Frisch’s pumpkin and coconut cream pies, probably the best pie I’ve ever had was the S’mores pie at a restaurant in Douglas, Michigan, called Everyday People.   It’s not even worth trying to replicate, because the housemade marshmallows are so delicately done and married with the chocolate and graham cracker crust.     It’s one of those pies that it’s hard to match the original.

So whatever your flavor there are numerous pies to try in Cincinnati.    And now is the best season to start trying some.